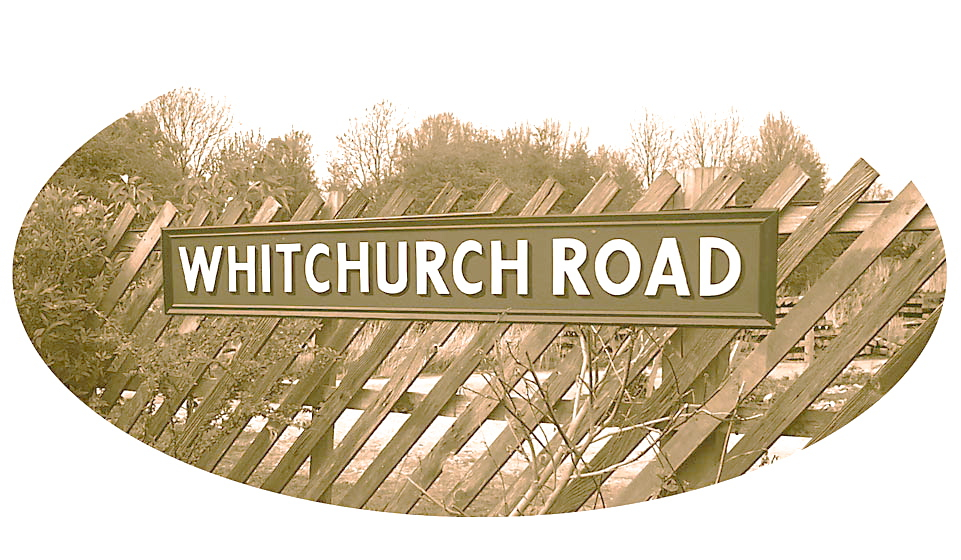 The two finished baseboards for my 7mm scale layout were dug out and exhibited at Railex 2010 and I received a good deal of encouragement and enthusiasm for my efforts.  The subject is a little-used wayside Metropolitan Railway station in the Vale of Aylesbury in the early twenties, similar to Waddesdon Manor.  Everything is scratch built apart from the rails, figures and a few wagon kits.  The ‘H’ Class 4-4-4T Locomotive was built from the excellent Quainton Road Models kit developed by David Howes. These are now available again along with the rest of the QRM range via Davids new website, (see ‘Partner Weblinks’ section), an absolute must for all 7mm Met & GC followers.  Photos are from the M.R.J. no 207 feature by the courtesy of David Lane and Barry Norman. 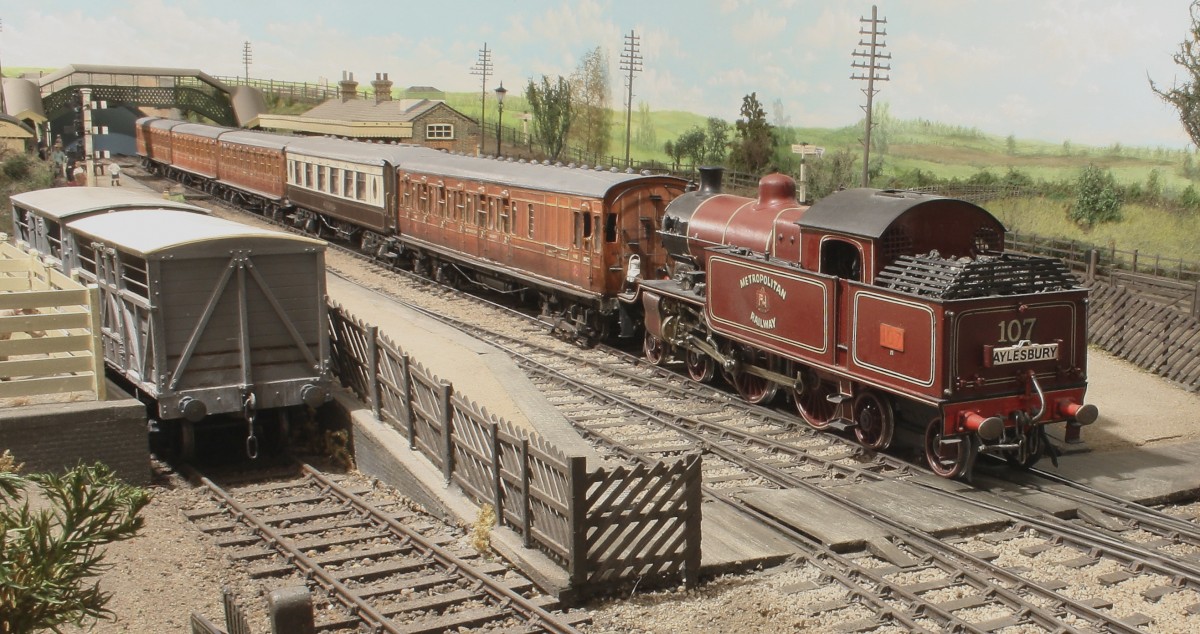 1920 saw the introduction of the handsome H class 4-4-4T locomotives. They were fast and capable, working the trains north west from Rickmansworth, over the Chilterns at Dutchlands summit and down into the Vale of Aylesbury.  This train is made up of teak Dreadnought carriages, and ‘Galatea’, one of the two Pullmans. 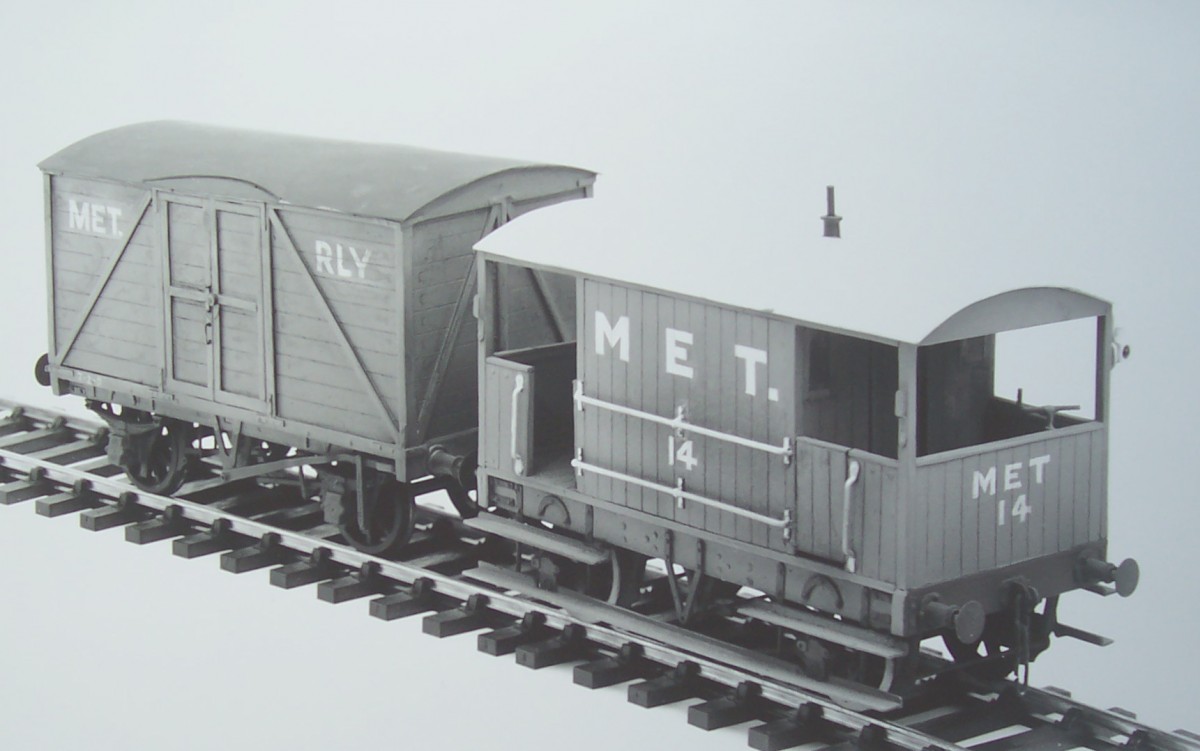 A Quainton Road Models etched Brass box van, and a scratchbuilt brake van before they painted the end panels red. 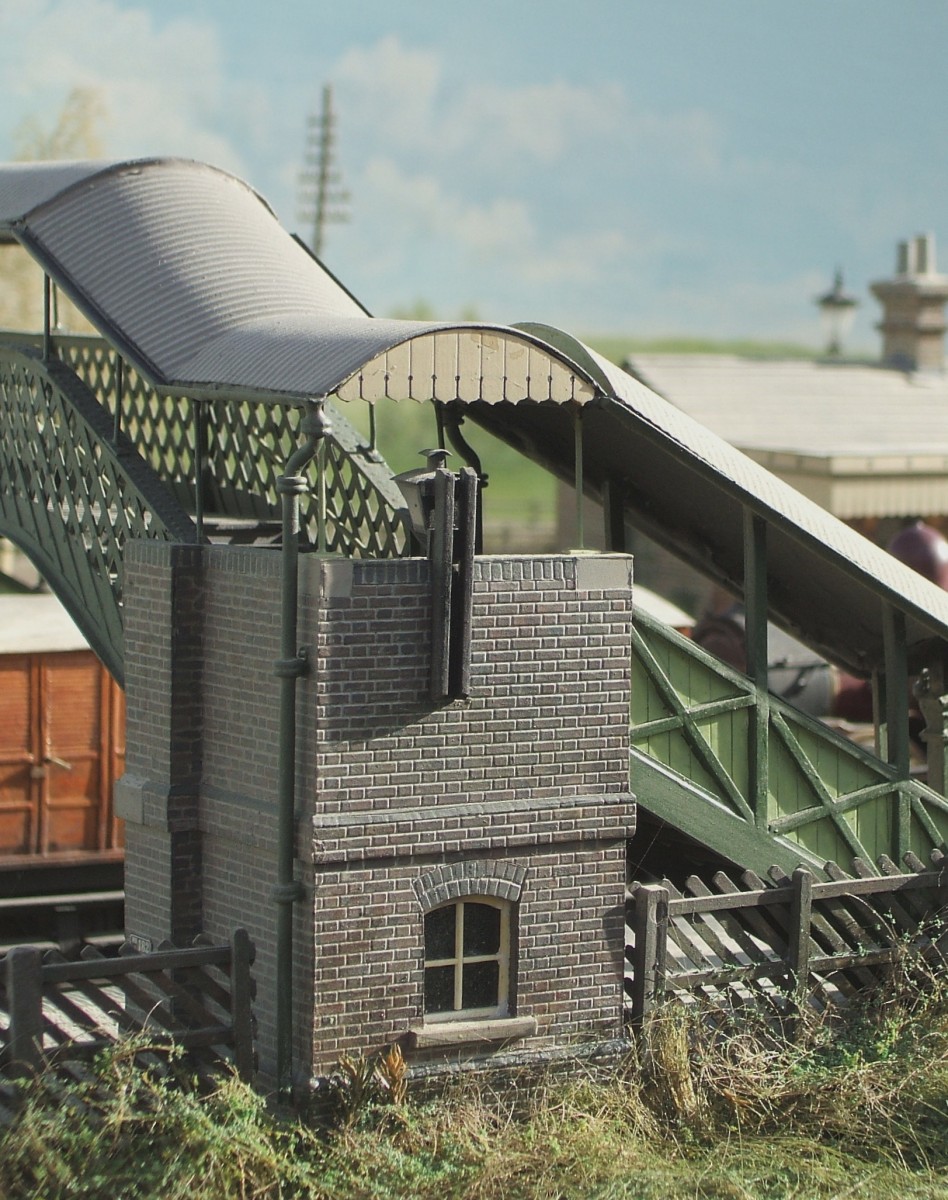 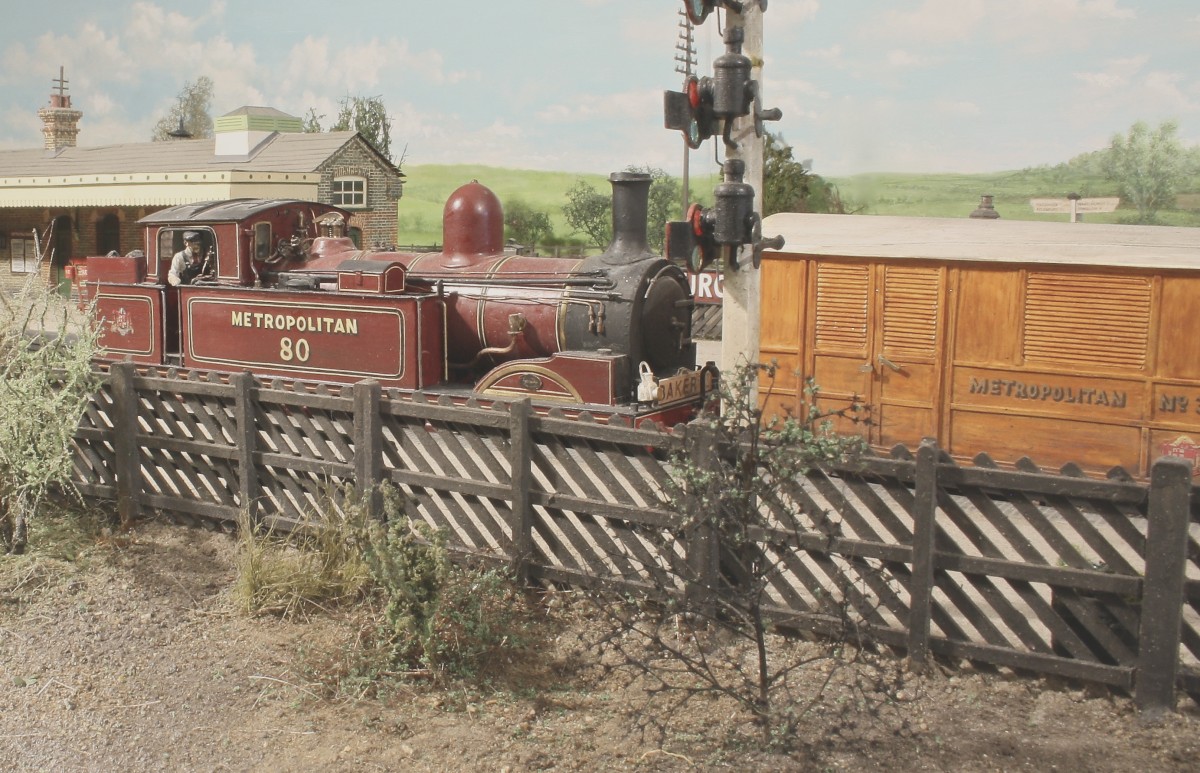 An E class 0-4-4T with a louvred teak milk van, seen from the approach to the coal staithes.

The GCR motor car often had the odd wagon coupled on, but it looked much better without. 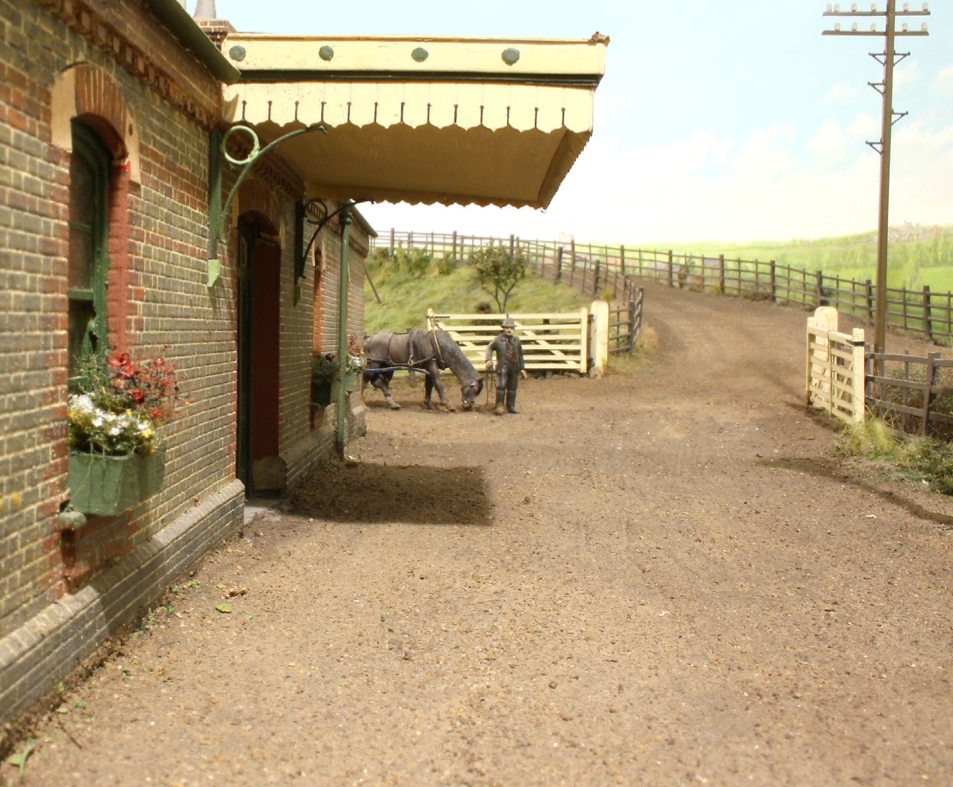 The station entrances in this part of Aylesbury Vale were pretty quiet, with very little adornment. All the buildings had a bracketed canopy like a foreshortened version of the platform side.

No 80 in the coal siding, the goods platform is the other side. 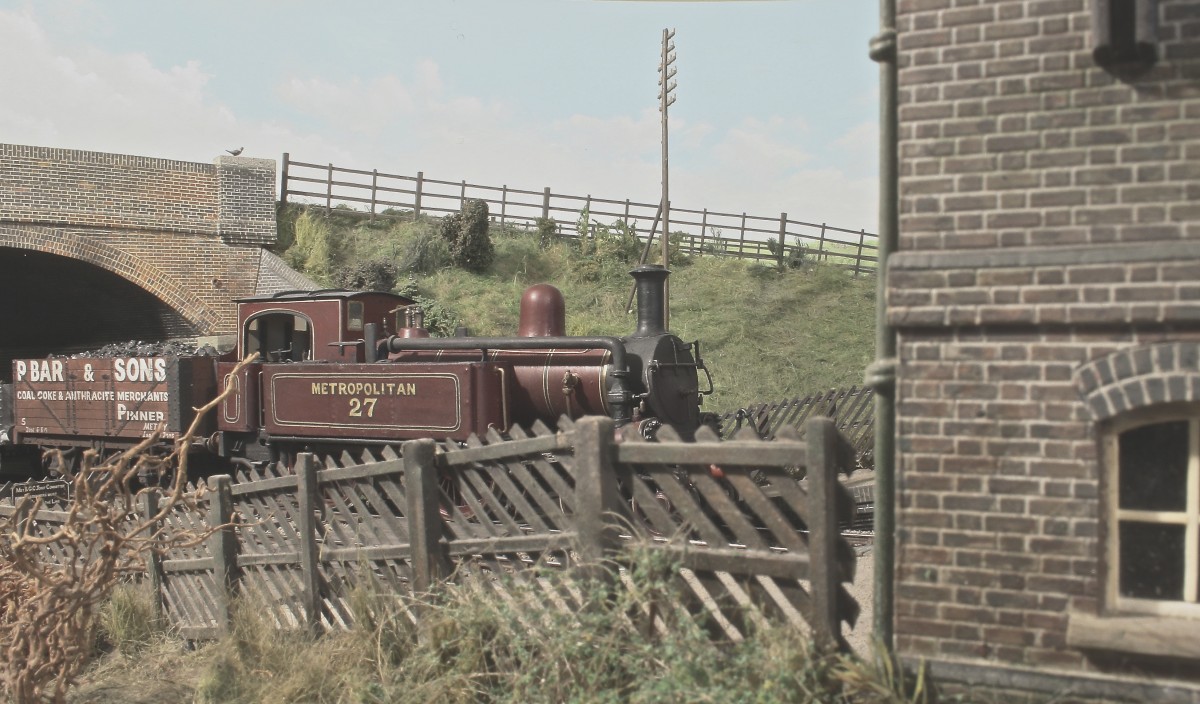 No 27 somehow still had it’s condensing pipes, like No 23. One Beyer-Peacock 4-4-0T was sold to Sir Arthur Elvin for pulling contractors trains when dismantling the Wembley Exhibition. 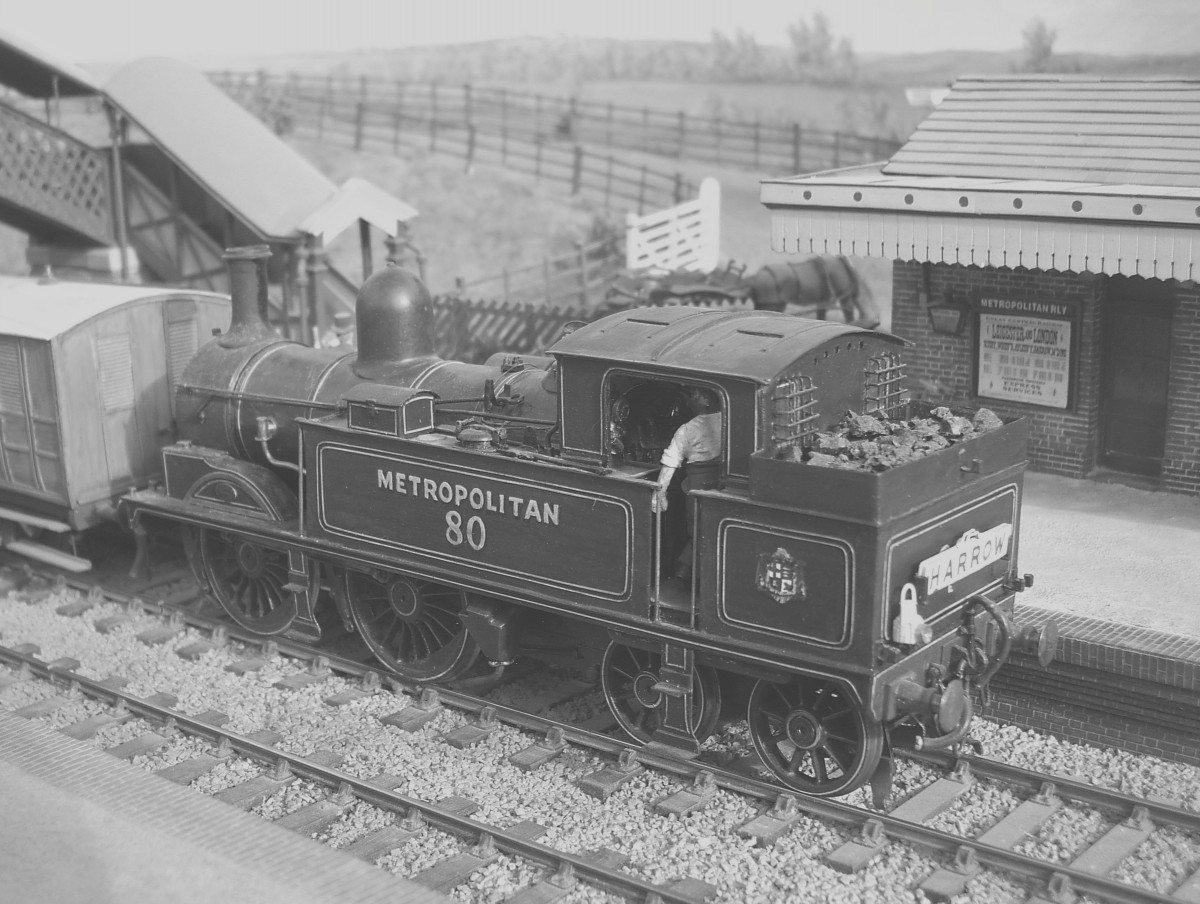 The E class engines were used for secondary duties, with the newer more powerful G,H and K class locomotives on the heavier main line trains.

Stephenson Clarke opens were quite a common sight on the Met & GC. 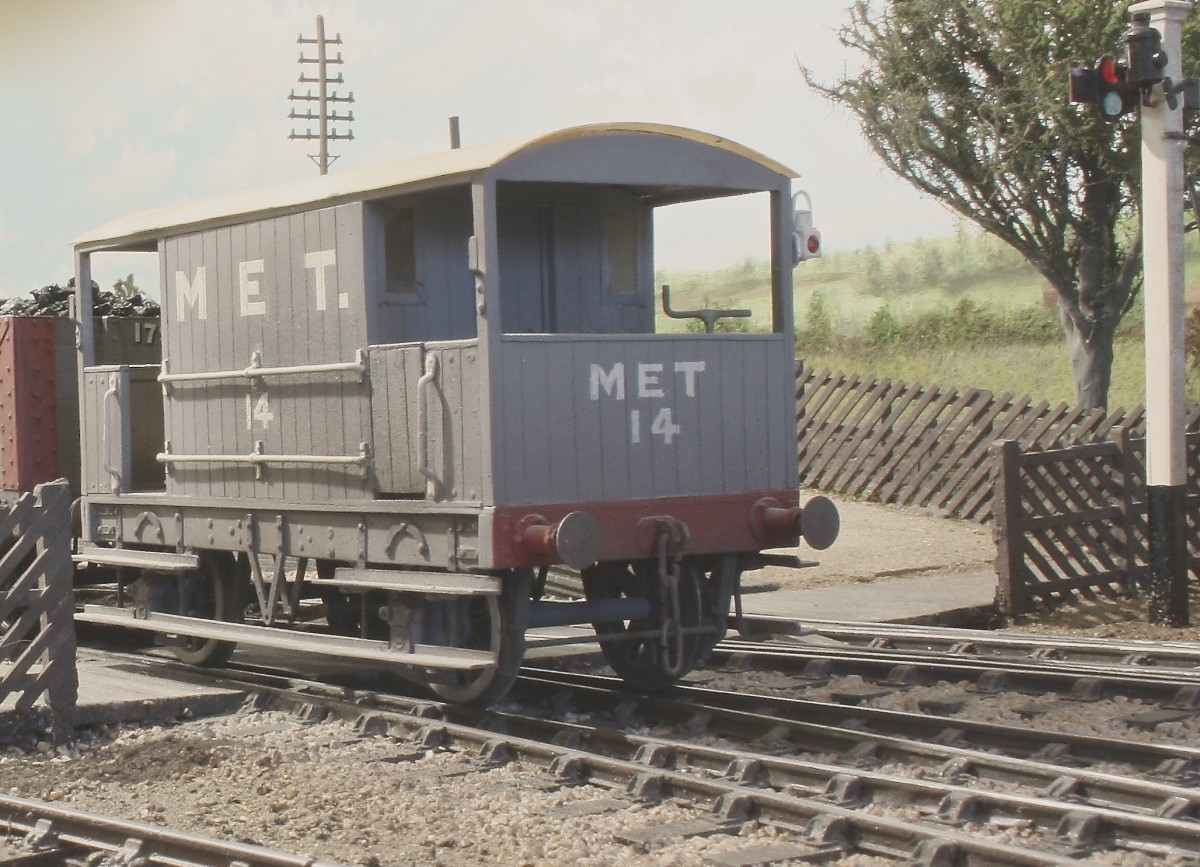 The back end of the coal train crossing the trailing points. 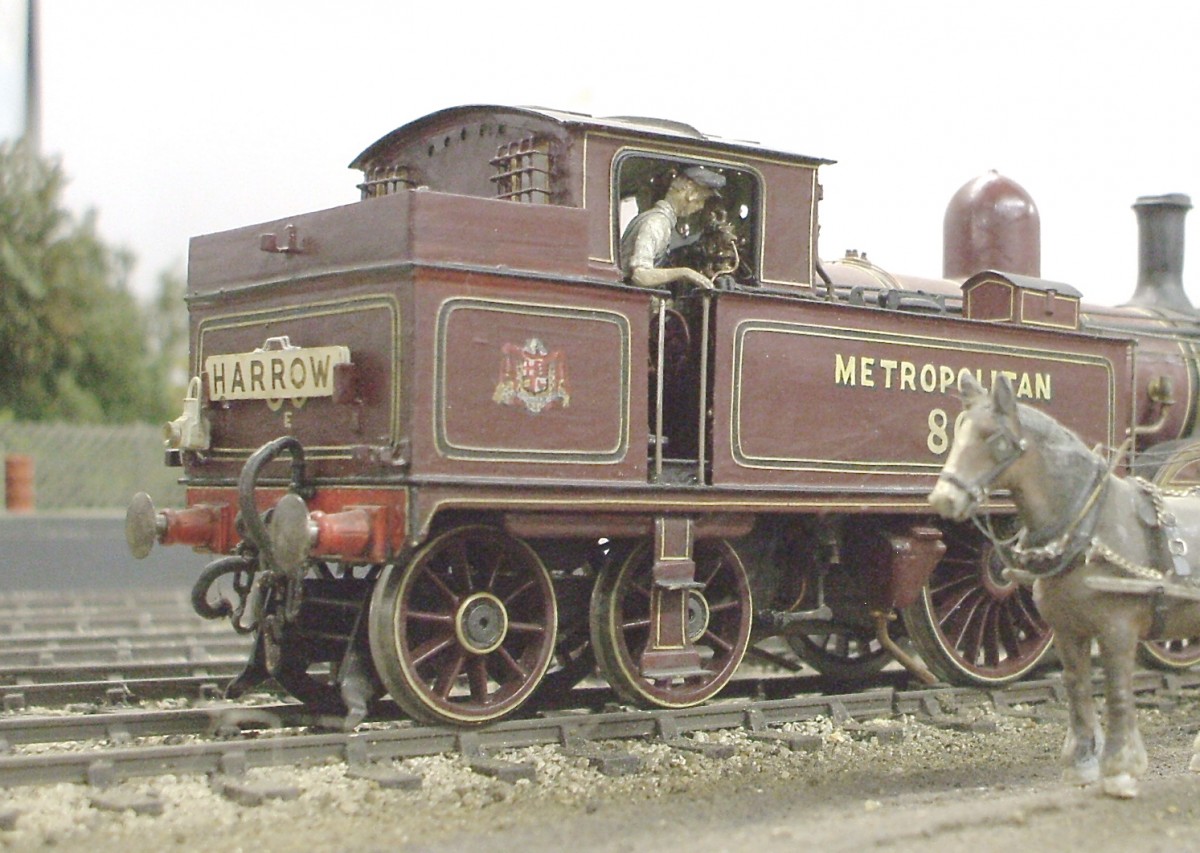 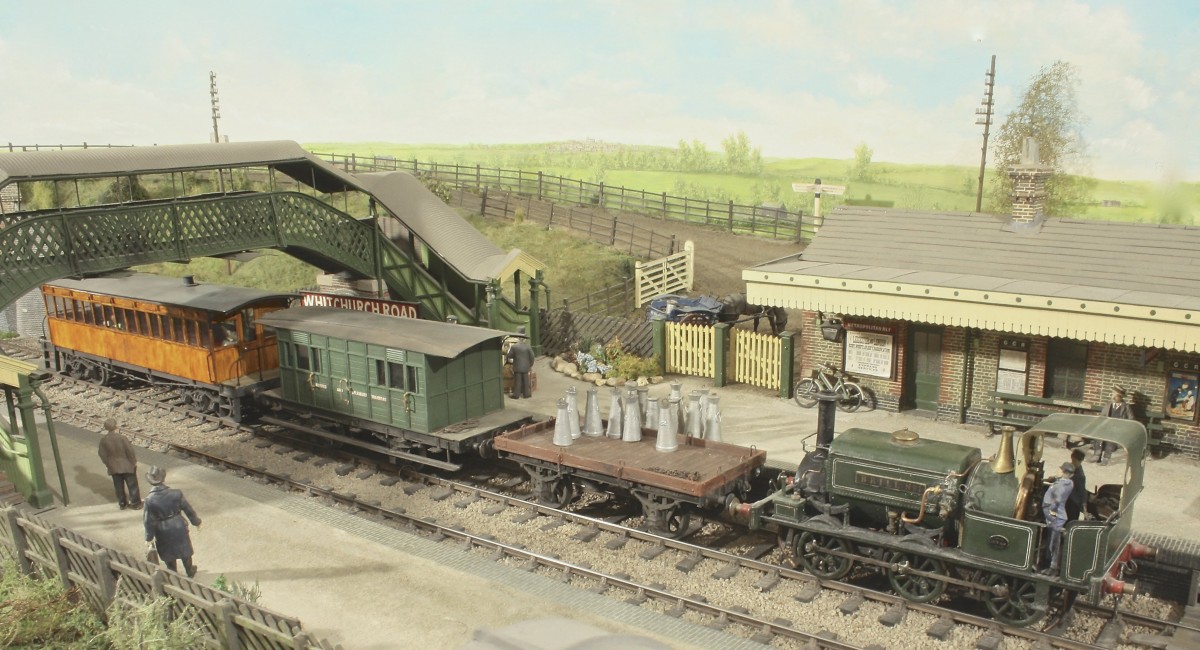 A Brill Tramway train With a Manning Wardle 0 6 0ST. 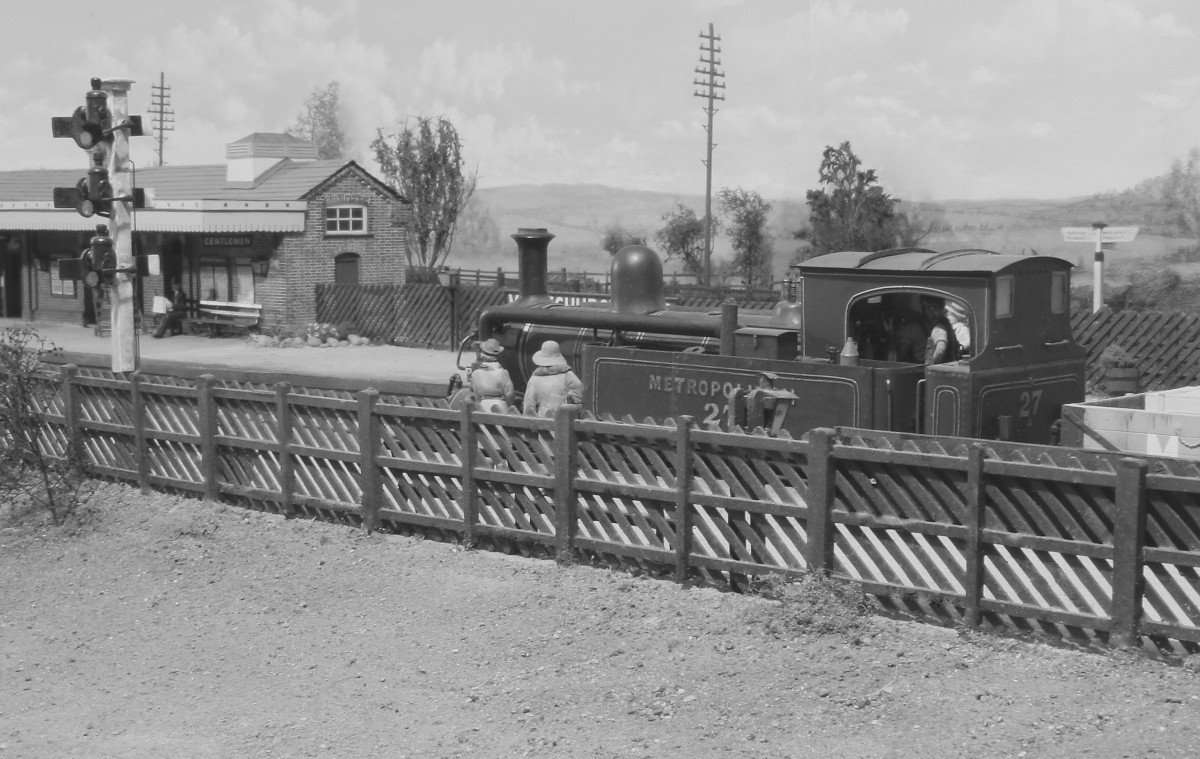 A Beyer Peacock locomotive No 27 shunting a Met 5 plank open wagon, the Chambers three arm shunt signal is similar to the example at Rickmansworth, These dated from the opening of the line, and had smaller sized arms than their later cousins.

Andy Duncan found me this whitemetal kit of an Oxfordshire Hay Cart with timber raves. It would have been yellow with red wheels, like this, and it sits at the top of the embankment by the Great Central bridge. 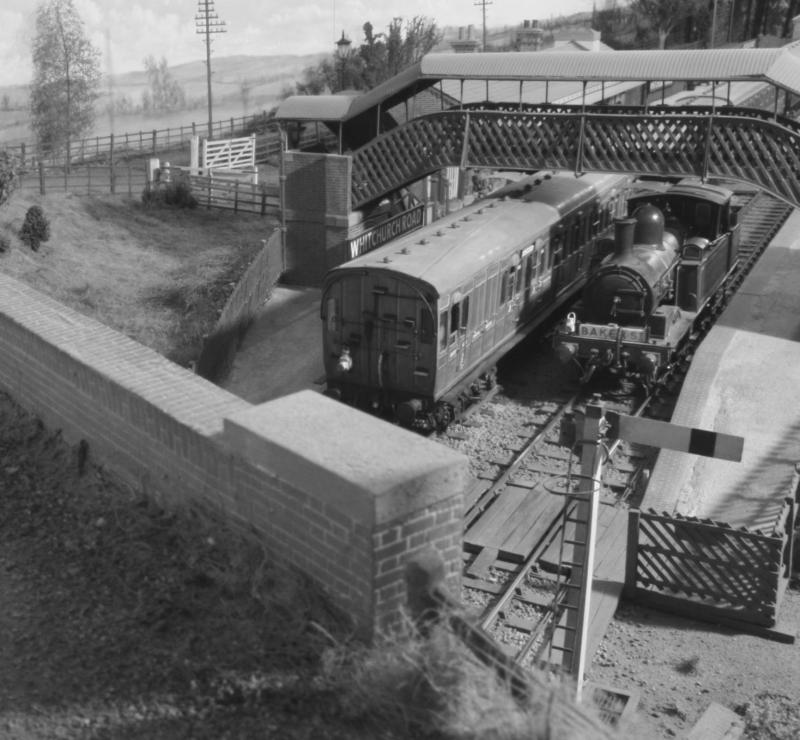 An ‘E’ Class 0 4 4T runs light engine past a passenger train as seen from the bridge parapet. The original Chambers platform starter signal and the picket fencing have been replaced since the station was built in 1898.

The station is typical of those found along the Metropolitan north of Aylesbury Town.

Waddesdon Manor and Quainton Road had both Met and G.C. mainline trains running through, Granborough Road and Winslow Road stations were on a smaller loop away from the London Extension, so they only needed level crossings instead of bridges. 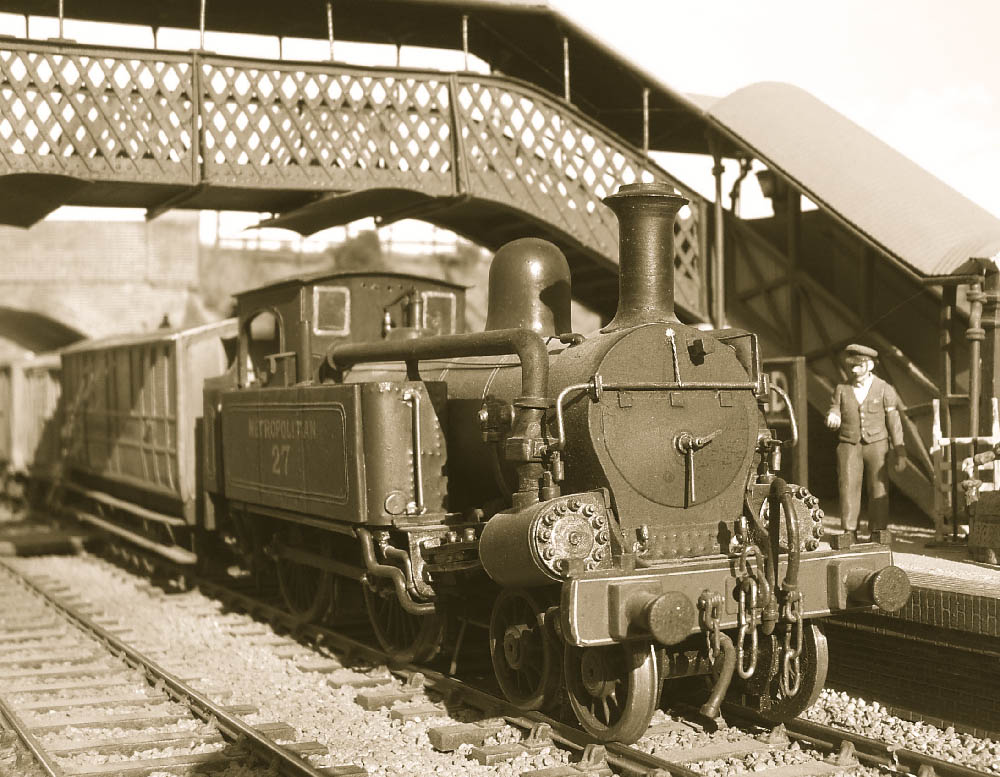 A handful of the once numerous Beyer Peacock condensing tanks survived the 1907 electrification.  Nos 23, 41 and occasionally 27 were seen in the area, retained for departmental and branch line duties. 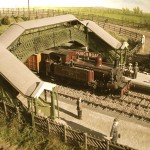 Similar covered footbridges were also used by the L.S.W.R. on Dartmoor. 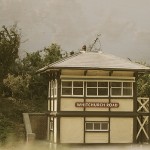 The timber signalbox has a sun blind, and a hipped roof. 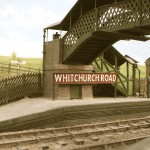 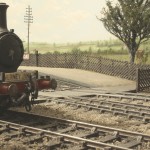 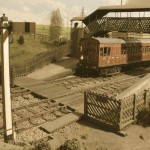 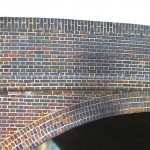 Identical to the skew span arch 179 at Waddesdon Manor 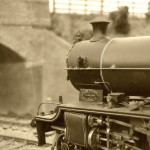 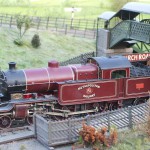 The livery would change to a simpler writing within a few years. 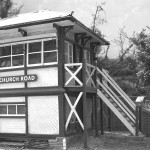 A retained recess in the cutting accommodates the cabin at rail level. 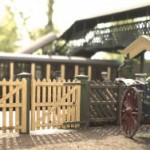 The platform delivery gates are the original Picket type 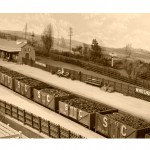 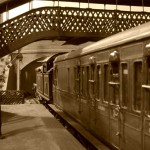 Dreadnought carriages in the platform, with an ‘H’ Class 4 4 4T.

The cart horse has it’s harness detail from reference.

The access road as seen from the weighbridge office. 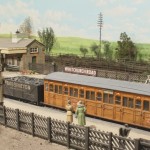